The Madras Affair
by
Sundari Venkatraman

Sangita Sinclair was not always this successful & passionate lady, heading the NGO “Penn Urimai” for downtrodden, abused and homeless women….
When Sangita catches the eye of Gautam Sinclair she is a simple, homely girl; utterly unaware of her charms & capabilities. She has the devil’s own time in overcoming her inhibitions, hesitation, and her family’s orthodox and outdated rules before recognising her love for Gautam.
Will Gautam be able to solve Sangita’s Dilemma or will she be forever trapped in her past?
Meet Gautam

Gautam has an Indian mother and American father. Built like a giant, he has brown hair and brilliant blue eyes.
Gautam lives with his maternal grandparents in Besant Nagar, Madras. He used to run a business with his father in Washington DC. Giving up his high-flying career, he chooses to teach at Loyola College in Madras. Yeah, Gautam had fallen in love with the city in Tamil Nadu during his visits to his grandparents.
Despite his American upbringing, he’s comfortable living in the same house as his grandparents. And does he love teaching!
He’s attracted to Sangita at first sight and pursues her relentlessly.
Read The Madras Affair to find out if he’s able to get together with the love of his life.
Like what you see ? Get Your Book Here
amazon.com | amazon.in | amazon.uk | amazon.ca | amazon.au| Flipkart

Reading ‘The Madras Affair’ was like a roller coaster ride. It had its own ups and downs, there were moments which made me feel ‘ cut the detail and come to the point ‘ or say slight touch of boredom but the elegance of writing was strong enough to make me go on and finish the book in one sitting ! 😀 The detailing and the beauty of writing is the strength of the book; and about the detailing, I believe some points are to be detailed well with care in depths and some to be covered in a fly over where here the writer have detailed all the parts deeply.
The author’s bio said about her love for ‘happily ever after’ and ‘ Mills and Boon ‘ romance and this truly show justice to that point. The story shows life of a widowed woman in claws stereotypes of society and makes the point that life always gives you second chances and there is always sunshine after a storm. I found the way how the protagonist was brought to go to her flashback and the emphasis on  how  “log kya sochenge ” poisons happiness and how money can make things easy interesting 🙂 .
The way the story moved stating ‘ blue eyes ‘ , ‘ her children ‘ etc made it was for guessing the next right; it the story line became obvious; I would prefer elements of suspense and surprise than the obvious which will make it more interesting. Also I found the characters too extreme to be real, the typical orthodox parents who have no limits, FOREVER blinded in their world and whole of ‘ Sinclair ‘ family to be so accepting and good. The attention on physical beauty made me feel that the guy fall for her physical beauty more than her but it had its own reasons for so!
Overall it was warm reading such a romantic story which had its right portions of most of what a romance genre reader might look for in a book!  I would rate this book  3.75/5 😀 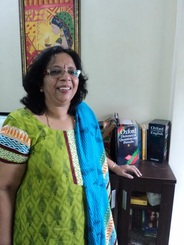 Growing up on a heavy dose of fairy tales and comic books, Sundari fell in love with the ‘lived happily ever after’ syndrome. It was always about good triumphing over evil and a happy end.
Soon, into her teens, Sundari graduated to Mills & Boon romances. And that got her thinking – how about such breezy romances in Indian settings? Her imagination took flight and she always lived in a rosy cocoon of romance over the years.
Then came the writing – a true bolt out of the blue! Sundari had just quit her job as a school admin and was taking a break. She was saturated with reading books. That’s when she returned home one evening after her walk, took some sheets of paper and began writing. It was like watching a movie that was running in her head – all those years of visualising a perfect Indian romance had to be put into words. The dormant romantic storyteller in her finally found its calling and The Malhotra Bride was born. While she felt disheartened when publishing didn’t happen, it was her husband who encouraged her to keep writing.
In the meanwhile, she landed a job as copy editor with Mumbai Mirror. After working there for two years, she moved to the Network 18 Group and worked with two of their websites over the next six years, as content editor.
Despite her work schedule, she continued writing novels and short stories and had them published in her blogs. She also started blogging voraciously, writing on many different topics – travel, book reviews, film reviews, restaurant reviews, spirituality, alternative health and more.
Her first eBook Double Jeopardy – a romance novella – was published by Indireads and has been very well received by readers of romance.

In 2014, Sundari published The Malhotra Bride (2nd Edition); Meghna; The Runaway Bridegroom; Flaming Sun Collection 1: Happily Ever Afters From India (Box Set) and Matches Made In Heaven (a collection of romantic short stories) in form of ebooks.

Click the picture of the book cover either the paperback or on your kindle /laptop or any device you are reading this book on. With our without Selfie. Tweet the picture using the #TMA and win the following prizes
Fabindia coupons for prizes:
Rs. 1000 – 1 prize
Rs. 500 – 2 prizes
Rs. 250 – 4 prizes

This Tour is Hosted by

2 thoughts on “BOOK REVIEW- THE MADRAS AFFAIR By SUNDARI VENKATRAMAN”