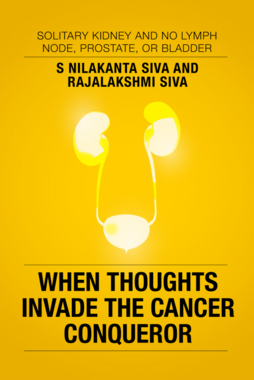 There is no escaping the crimes of the past, discovers Kuppuswamy. The price for smoking away his youth has to be paid. And pay he does, in the form of gross hematuria and bladder cancer. While cancer eats away at his insides, Kuppuswamy does not let it kill his spirit to fight. Fortunately, he is not all alone in this battle, as an army of doctors, support staff, family and friends come to his aid in full force. As he wages a war against the dreaded disease, through several bouts of painful surgery and frequent reviews, a few surprises await him. Amid premature celebrations, minor hiccups and major shocks, Kuppuswamy emerges a winner.
Minus a bladder, prostrate and several lymph nodes, Kuppuswamy pads up for a new innings. He realizes that life minus a few organs isn’t all that bad. Though he has to depend on external aids, which initially proves to be cumbersome and embarrassing, Kuppuswamy gradually accepts the new reality even as thoughts invade the cancer conqueror.

It takes huge courage to narrate your painful days to the world and I congratulate both the authors for this wonderful piece. When thoughts invade the cancer conqueror is a book by S NILAKANTA SIVA and RAJALAKSHMI SIVA. The book basically includes the real life experience of the author, how he fought the deadly cancer and won over it.

The story is about a boy during his college life getting addicted to the rolls and puffs. He makes them his friends in life. He knew that this had to be paid back and at the age of 70 he got infected by bladder cancer. The deadly disease took him down, the doctors and the chemotherapy sessions made him feel weak but by the support of his wife and family he fought the devil and came all the way. The feelings and emotions of a cancer patient is described well. The book is truly inspirational and a great one if someone wants to quit smoking.

The story is well presented by the author with an interesting writing style. But going deep, the book needs a good edit as it contain small glitches of grammar.

S NILAKANTA SIVA, aka Sivaram, was born in Mumbai on August 9, 1944. His early education was in Delhi when his father was working in the Ministry of Defence. His final years of schooling were done in Mumbai. Sivaram graduated in physics and mathematics and pursued his post-graduate studies at IIT-Madras. He then joined the nuclear physics division of Bhabha Atomic Research Centre. Gifted with an immaculate command over the English language, Sivaram led several public awareness programs to highlight the benefits of atomic energy. After retirement, he ran a medical transcription company for a couple of years, before he was diagnosed with bladder cancer. He battled hard and won the war against bladder cancer. Sivaram, along with his wife Poorna aka Rajalakshmi Siva, narrates the tale of how they together conquered the disease. Rajalakshmi is a Managing Partner at Madhurakalpa Collections in Thanjavur. They have two children and four grandchildren.