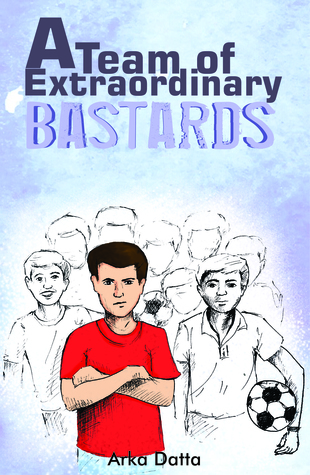 Arya Sen is destiny’s child, a young boy from Kolkata who is born to be the greatest the Football World has ever seen. The universe never fails to surprise him with good fortunes as he embarks on his journey from Kolkata to all over the world. But, just when he starts to believe that nothing can go wrong for him, everything changes.

Surrounded by loss, darkness, and complete absence of luck, Arya desperately waits for hope. And it appears but from the unlikeliest of places. With the support of his wife April and younger brother Ilan, Arya takes upon him a task that is bigger and more important than all of them. This time, he is up against his greatest friend: Destiny.

Review:
Life never a bed of roses always, there will be a good time and bad time, struggles and easy win; Arya follows the same path too. As he falls into a pit of hopelessness as he loses everything valuable to him, it takes everything on him to try rebounding back. His passion … dreams… life is at stake. He is not leaving without a fight if it’s with faith and destiny so be it! What will be the result? Get a copy and read more to get inspired by Arya.

I loved how the plot took its shape, with Arya on the center line and football as a key, the story inspires and motivates you to never give up on your life. It was entirely different from the usual romantic flicks that crowd publications now. The writing and thoughts conveyed impressed me. The characters were sketched very well with all due importance that fit in well with the story. At times it simply reminded me of the thought – when life gives you lemons there are several ways to make use it, you can sell it and earn, you can make lemonade and sell or drink, what not you can even find a guy who got vodka and have shots 😉 . As you leaf the pages of the book, Arya will grow on you and might stay close to you even after your read, he is such a beautiful character. An outstanding inspirational story with an engaging plot, in short! Just that book cover design and title could have been something better.

My rating is 4.5/5. I would like to recommend it to my readers and followers 🙂

Arka Datta has studied Maths honors and had training in multimedia to become an Animator at 2008. He then started an Animation house with few friends, and started another Media development company later when the Animation house thing didn’t work. Few years later, when that ended, he joined an Ad agency as a Graphic Designer.
On 2011, he left everything to follow his dream to become a writer, and started an online blog magazine. Later that year he concentrated on writing and took up content writing as a day job. Last known, he is a published author and working with new stories…