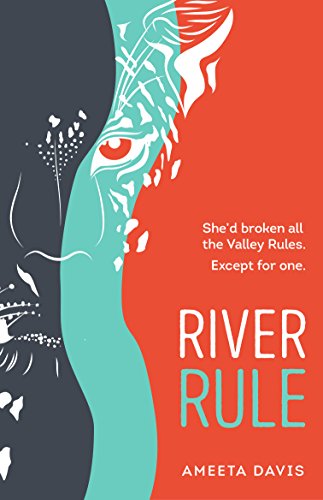 The jungle is closing in.
First it sends a welcoming party of parakeets.
Next, a garland of disembodied chicken parts.
Finally the tribesmen and their spears arrive demanding human trades of Avi and Una, the property developer’s firstborn grandchildren.
Twice before, the jungle tried to take Una when she took risks.
Twice Avi foiled their attempts.
This time he’s not there — yet she can feel him somewhere near.

River Rule is a dark, urban fantasy, which pivots precariously on the friendship between a boy and girl from different cultural
backgrounds. It deals with deceit and treachery, but it shows that, even when familial unconditional love is withdrawn, strength and kindness can be found elsewhere – even in a jungle.

“She’d broken all the Valley Rules.. except for one… RIVER RULE!

Th artistic and alluring cover design and the intriguing blurb and the tag-lines… piques great interest from the readers and you can’t help but grab a copy and dig in and that itself is a major plus point for a book.

RIVER RULE takes you along to meet Una, her normal life Manchester took a grave turn as she landed in India followed by her mother’s death. There she finds herself as well the truth of the jungle which leads to further awakening and uncovering of some forgotten mysteries. River Rule is fantasy fiction, the story of Avi and Una; two very different lives, like fire and ice!

It is indeed a challenge as an author to create a world based on imagination, an alter-world maybe… that can reach the audience with the same or more level of surprise/adoration or understanding as intended by… and here I could say the author pretty much pulled it off well and good. And the point that the plot is weaved on suspense and mystery is all the more cherry on the top.

Get your copy from Amazon